A downloadable game for Windows, macOS, and Linux

Hey: this game is mildly NSFW. There are pixel boobies. Don't play it while your boss is watching.


Do you enjoy being forcibly turned into things for the sake of some fairly gentle puzzle-platforming? Wow, weird. But maybe you'll enjoy fox flux!

I made this in a month for my own Strawberry Jam, but I have a lot of leftover ideas and would like to expand on it in the future! Stay tuned.

Runs on anything resembling a computer. Saves automatically, so feel free to quit at any time. Gamepads are supported. The only controls are the four directions, spacebar (or the A button) to jump, E (or the X button) to interact. Also, Esc (or the Start button) for the menu.

The game is... medium-short? I haven't played through the entire thing in a single sitting, and it depends whether you're going for max%. Rough guess is about an hour for an average playthrough.

I'm aware of a few minor bugs, and I expect there'll be a few major ones I haven't run into. Sorry! Jam game and all.

sorry, i don't think that's really possible; the engine i used doesn't have a way to do that currently

Hey! I really liked this!

A very simple premise that really starts to get challenging near the end!

Although, I do have two little gripes. (I know this was a GameJam game, so I can kinda sorta forgive these but since you're still working on this, I thought I'd say something about it.)

Since the first four levels are used to teach the player vital gameplay mechanics, giving the player the chance to skip one of these important levels probably isn't wise (to be fair, they aren't exactly hard to understand). Since you've probably already built out a whole bunch of levels, The only idea I can think of to fix this is to increase the amount of collectable required to progress to more than you could collect from 3 levels alone (although this would mean you wouldn't be able to use the haha funny sex number joke).

You could also remove a few unnecessary collectables to lower the amount in each level, to require the player to actually play through each level. Now I believe you deliberately put a whole bunch more collectables than you'd need to progress to allow the player to skip a few collectables if they found them too hard to reach. You can still do this! Simply cut 5 collectables out of each level, so that there's 80 all up in each area! That's still 11 more than what you need, but beating only 3 levels, even to 100% will only leave you with 60. Nine short.

My last suggestion is to require the player to "Complete" the levels. Maybe a level could have an end. Maybe an exit, or maybe a Muguffin. Maybe some kind of goal? It's your game!

Oh and on that note, these are just suggestions! They are by no means what you have to do, and maybe you'll come up with a better solution that I haven't even thought of.

Although the base problems are something I believe needs addressing.

Hey, thank you for the thoughtful feedback!

I am indeed still working on it, and the current state of the game doesn't count hearts as collected until you reach the exit, plus has some other things per-level to find.  And there'll be a lot more levels with more specific heart gating (and fewer hearts in general), so I don't think funny sex number will be as much of an issue.

That's a pretty good point about letting the player skip early intro levels; whoops!  I admit I'm a fan of the "we're all adults here" approach and letting you skip around if you like — big Super Mario World vibes — but it honestly hadn't occurred to me that a new player could inadvertently skip an entire mechanic's introduction.  I'll try to be more careful about that with the full game.

no, still working on it!  there's just a lot to do and i work on other stuff too

I don't understand what kind of sexy features to expect from the summary and the screenshots alone. The link in the comment is broken too.

It's pretty much as the summary says: a puzzle-platformer where the core mechanic is turning into things.  There aren't any explicitly sexual CGs or anything.  If you're not into transformation at all, it'll pretty much play like a jam version of Wario Land 3.

Could you perhaps add an option that skips or censors the NSFW stuff? This looks fun, but someone is always looking over my shoulder. If not, I understand.

I'm planning on it for the expanded game, yeah!

Very lovely game! I really enjoyed the puzzles throughout as they all seemed to make good use of the transformation mechanic.

Definitely try the Wario Land series, all of them except the newest, gamecube, and oldest ones use transformations to solve puzzles too. I'd personally recommend Wario Land 4, but 2 and 3 are good too!

The game is great. My one issue is that I experience severe slowdowns in areas 3 and 4 of the second section, making the necessary fine-tuned jumps impossible.

Hm, that's a shame. I had a bit of slowdown in those, but thought I fixed it. How good is your computer, very roughly? I've got a fairly beefy machine for development reasons so it's hard to tell how much wiggle room I have.

It’s far from top of the line, but it can play Fallout 4 reasonably well.

Skip it for now, then! You can come back later, and you don't need all of the hearts anyway :)

Pretty neat overall, I'm surprised you were able to do so much in a month. Having the cable tiles update once a frame is a pretty slick effect, I wish I thought of it. Different conversation responses depending on what form you're in is a nice touch.

1-2 was a slog to collect everything in, you have to do everything in a very specific order and if you mess anything up you have to start over again. Exacerbated by the blind fall or two you need to do in the level.

Thanks! It honestly doesn't even feel like that much.

Wires updating once per frame was more of a way to avoid having very long wires potentially hold up an update, but I do like the visual effect. I'd kinda like to make it time-controlled instead, even.

Yeah, I know forest 2 is a bit... massive. There's a tricky balance to strike here: you only need ~⅔ of the hearts, so surely some of them should be harder to get, so going for 100% is actually an accomplishment and not something that happens naturally just from walking through the levels. But at the same time, making them too hard will frustrate people who are trying for 100%, even though the game doesn't require it and nothing actually changes.

Ha. Lexy used to walk faster, too. I kinda want to do something clever here, like sync the walking animation framerate to Lexy's movement speed.

The tail is, uh, mostly positioned that way because I ran out of space in the frame. :) I extended it downwards for the sake of jumping, but extending it leftwards would mean I have to fix a bunch of anchors, and apparently I was too lazy.

I'm not particularly happy with the parallax, yeah. The forest ought to be visible for much longer when moving upwards, but even in the hub it's half-buried beneath the ground. I even had multiple layers I wanted to add in, but the math was not working out and I didn't have time to sort it all out.

Uggh, controls. The movement keys are on the right on a keyboard, even if you use the numpad... but a lot of games use WASD, which is on the left, so you can still use the mouse, and of course that's where they are on controllers. I don't know, I wish there were a decent standard here; I've also had people complain that I didn't use Z and X. I do like access to the I key for the inventory, so maybe sometime I'll try a WASD + JKL sort of thing, though that puts my hands kind of close together...

I synced the walking animation framerate to the character's movement speed on my own game, and I'm pretty happy with the effect. I'm sure you won't have much trouble figuring it out yourself if you decide to do it.

WASD+JKL is probably what I would use for my own game, if I had the option. I suppose there's something to be said for allowing people to customize the controls. I look forward to moving on from PICO-8 so I can avoid the control restrictions, among others. 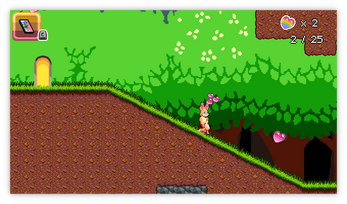 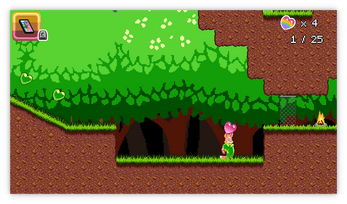 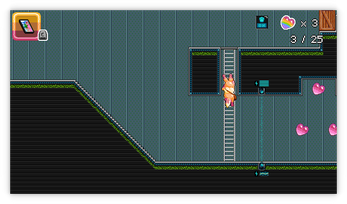